Lynch was the son of my great uncle Alfred Cobb.
Lynch's father and John (Jack) Wesley Cobb
(who is also remembered on this blog) were brothers.

I have researched the following information about Lynch
from his military records and other related texts.
I have endeavored to record the story
of his involvement in the war as accurately as possible.

Click here to see a family tree
showing Lynch's immediate family.
(Note that some dates and information given
are incorrect. Also, it was Lynch's brother,
also named George, who married Evie.) 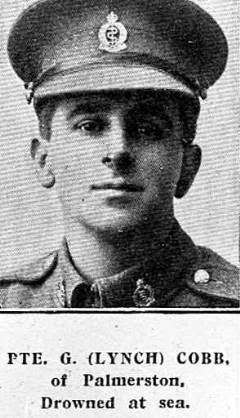 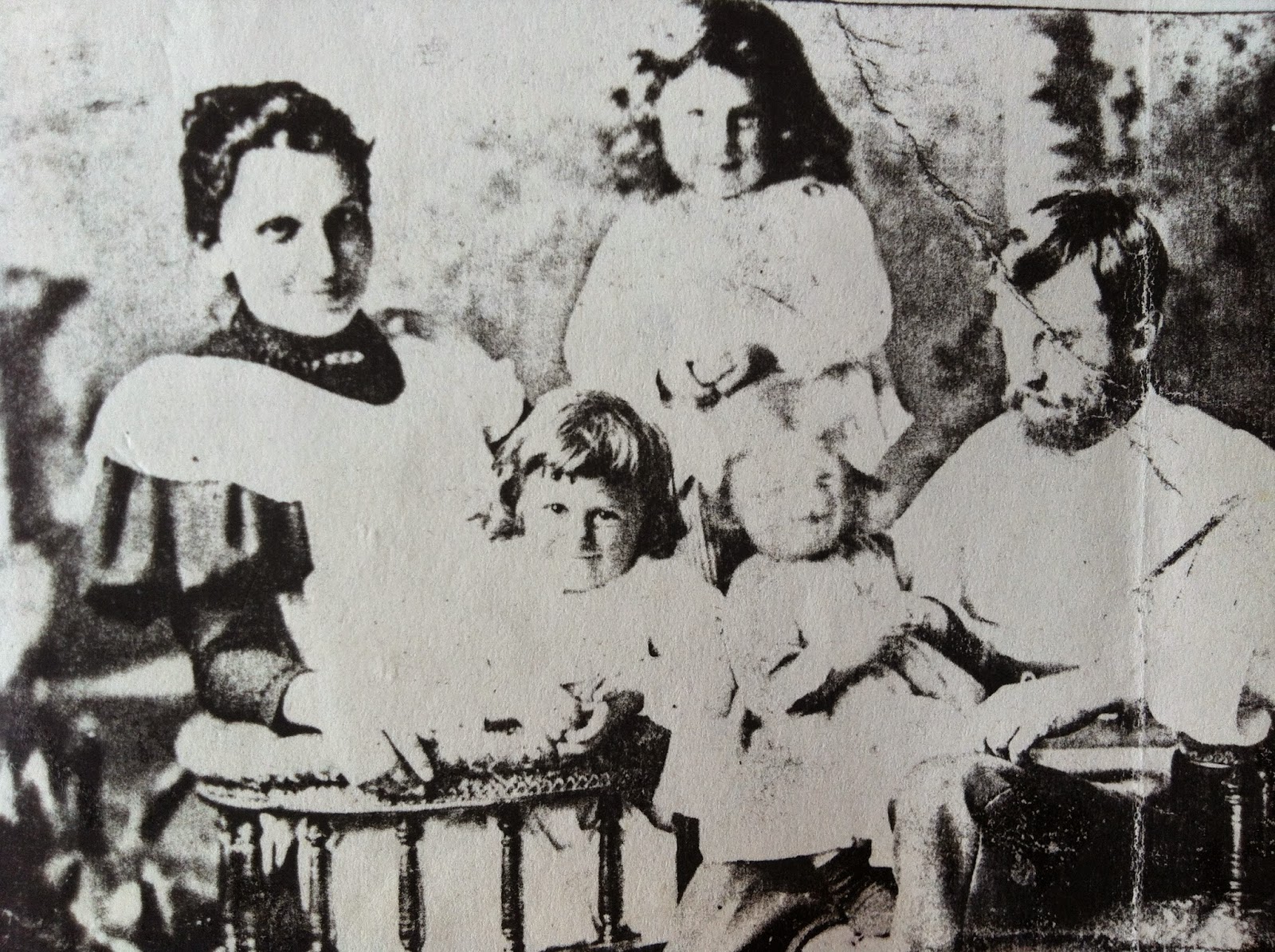 Lynch is the second from the left in this family photo.
From left are Laura (his mother), Lynch, Clarence (at back), Ruth and Alfred (his father).

Lynch and his siblings attended the Campbell Street School, which was once the largest school in the district. Lynch was very popular with the teachers and students there because of his cheerful disposition.


The Cobb family attended the Salvation Army Church. Alfred, the father was a Sergeant-Major in the church. By all accounts, his children were well-versed in the Bible and most of them, including Lynch, won prizes at the 1911 annual prize-giving, as the following newspaper article explains.


A similar article about the successes of Lynch and his siblings at the Salvation Army Church during 1912 was also published in the Manawatu Standard, Volume XLI, Issue 9705, 5 January 1912, pg6.

While at school in March 1911, Lynch, aged 14, sustained a severely cut lip during a game of hockey. This was the second time he needed stitches on his lip. His story was mentioned in the Manawatu Standard, (Volume XLI, Issue 9478, 29 March, 1911, pg4) as follows,

Lynch was a 19 year old cabinet maker working for Kells and Pike in Palmerston North when he enlisted for service in the war on 7 June, 1916. It is likely that he was still living at home with his parents who were living in Carroll Street at the time.

Lynch departed from King's Wharf, Wellington on the hospital ship Marama on 10 November, 1916 serving as a medical orderly with the New Zealand Medical Corps. He made one return journey to New Zealand when the ship brought back patients from the front line. He left New Zealand on the Marama for the second time, on 22 March, 1917.

Lynch is mentioned as below in the list of medical orderlies on board the Marama.

In March 1917 it was deemed unsafe to sail through the Mediterranean the ship stopped in Suez where the nurses were asked to disembark while the ship continued on a revised course towards Cape Town, South Africa, then on to New Zealand. Lynch and the other orderlies on the ship took over the roles of the nurses on this voyage.

On 26-27 May, 1917 there was a severe storm while the ship was sailing between Durban and Cape Town, South Africa.  At 8:35am on 27 May, 1917, a freak wave swept over the ship. Lynch, who was reported to be emptying some rubbish over the port side of the promenade deck, and a patient, reported to be Lieutenant C S Harrington (from the Connaught Rangers of the Irish Regiment of the British Army, and Sergeant Leaman (from the Manchester Regiment of the British Army), were all washed overboard. Lynch and Lieutenant Harrington (both aged 20) were drowned, but Sergeant Leaman was miraculously carried back onto the deck of the ship by another wave. Apparently, a life buoy was thrown over, the ship's whistle sounded and a search conducted for two hours for the two missing men, but there was no sign of life. Several others were injured during this incident, which is mentioned in Chapter 7 of the book The War Effort of New Zealand (p136) and also in the book, The Voyages of His Majesty's New Zealand Hospital Ships Marama and Maheno.

A Court of Inquiry was held on 28 May 1917 and it found that no one was to blame for the deaths of Lieutenant Harrington and Private Cobb.

A family document states that when Laura was told that her son Lynch had drowned, she already knew as she had received a vision. The document mentions two seashells which Lynch had brought back on first voyage abroad. 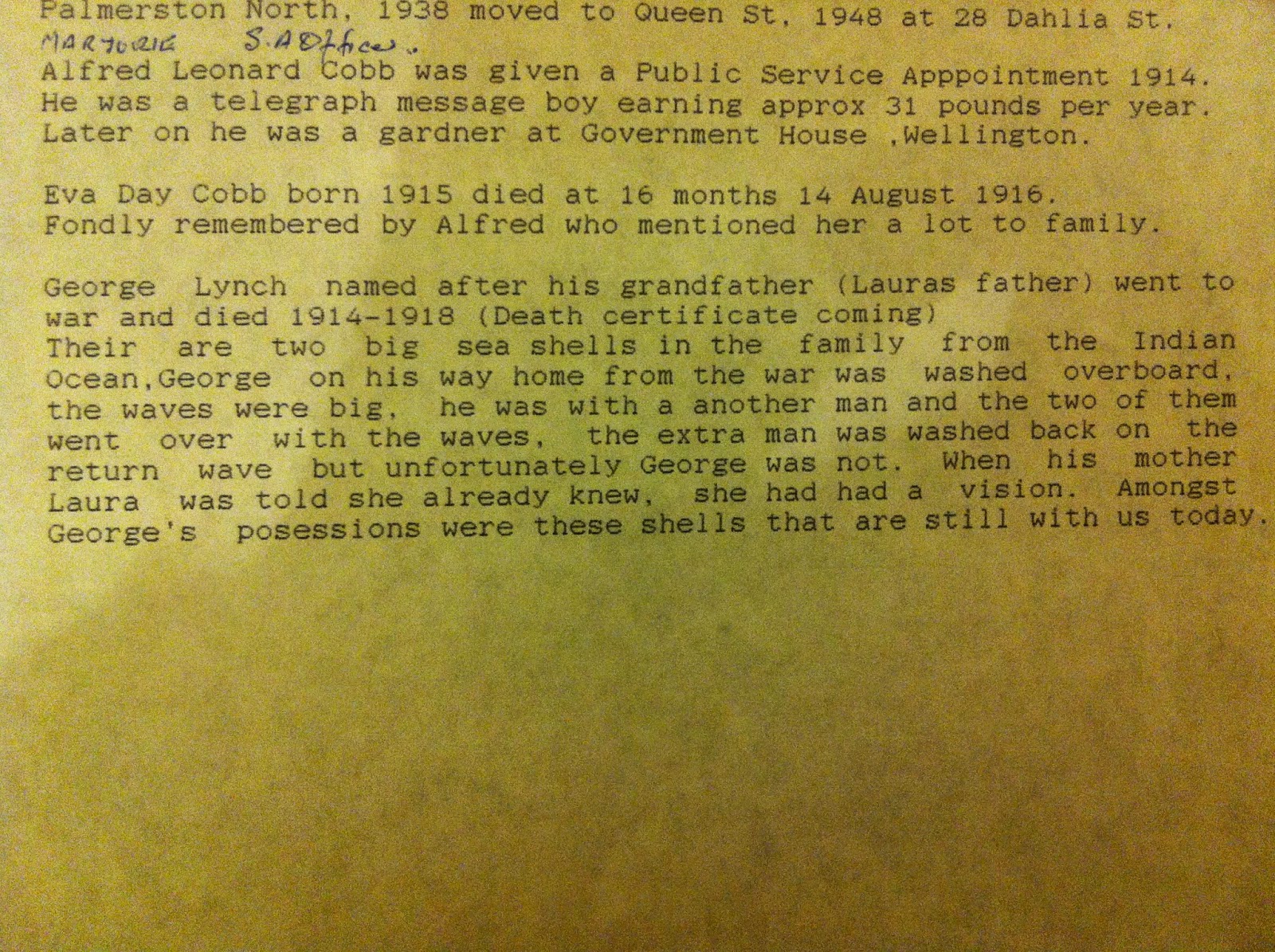 The article below was published in the Poverty Bay Herald, on 17 July 1917, recounting the circumstances surrounding Lynch's death.

Lynch is remembered on the Palmerston North war memorial (his name is listed as L Cobb), and his name is engraved on the Wellington Provincial Memorial in Karori Cemetery, Wellington.

About the hospital ship Marama
The Marama, was one of two re-purposed steamships which transported the wounded of all nationalities (including wounded German prisoners) during World War 1.  It was chartered four times. Lynch was on the second of these chartered voyages. Here is the Evening Post article of 9th November 1916, which announces that Marama is leaving from King's Wharf, Wellington, the following day. Private G L Cobb is listed here as one of the medical orderlies on board. 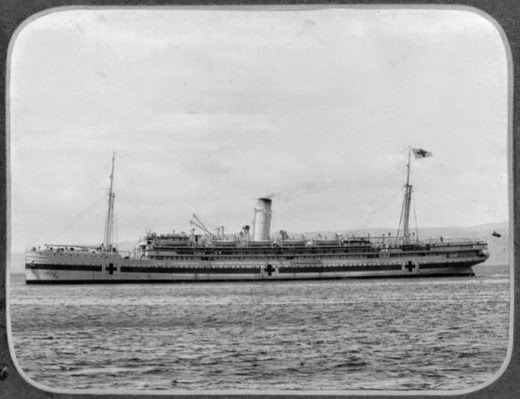 The hospital ship Marama during WW1.

Lynch's name appears on a commemorative board in Marama Hall, at Otago University, which lists all the medical personnel who served aboard the Marama during the First World War. A digital version of this honours roll is found on the New Zealand Military Nursing website.

Lynch's name (L Cobb) is also remembered on the War Memorial at the All Saint's Church, 338 Church Street, Palmerston North which was unveiled at a touching church service in 1920. His Uncle Jack's name was added to the wall as well later.

Information about the Marama
The link here provides details of the movements of the Marama during WW1.

At the end of the war the state of the art medical equipment on the Marama was distributed to military hospitals throughout the North Island.

The link here explains how the wounded were brought aboard the Marama.

The photo below shows Lynch's parents Laura and Alfred in the living room of their home 23 Myrtle Crescent, Wellington. (Date unknown)  Apparently they were a very spiritual family and often had visitors over on Sunday evenings to sing. You can see the family piano on the right behind Alfred. Lynch would not have visited this home as his parents moved here after he died. 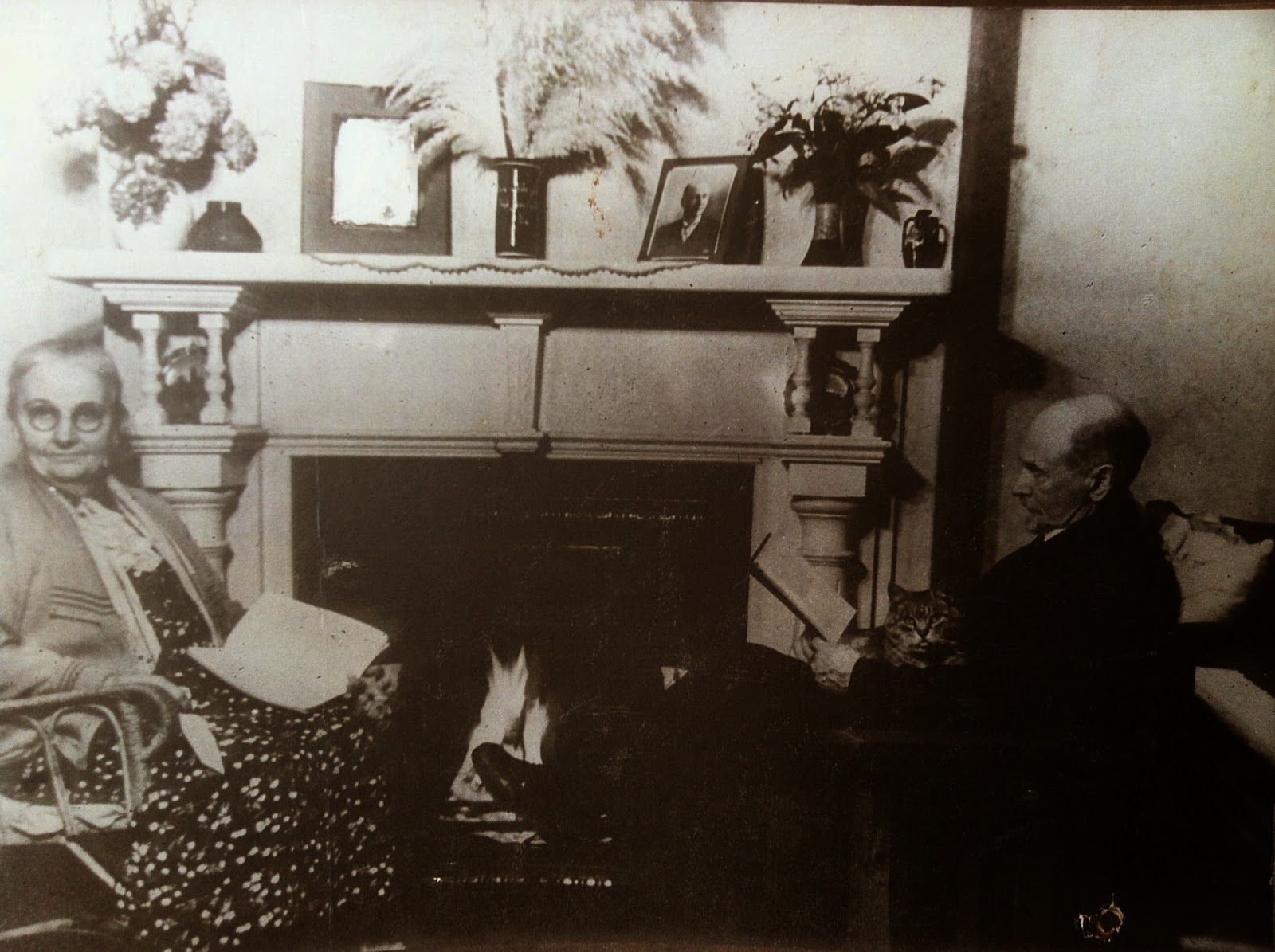 Timeline of NZ's involvement in WW1 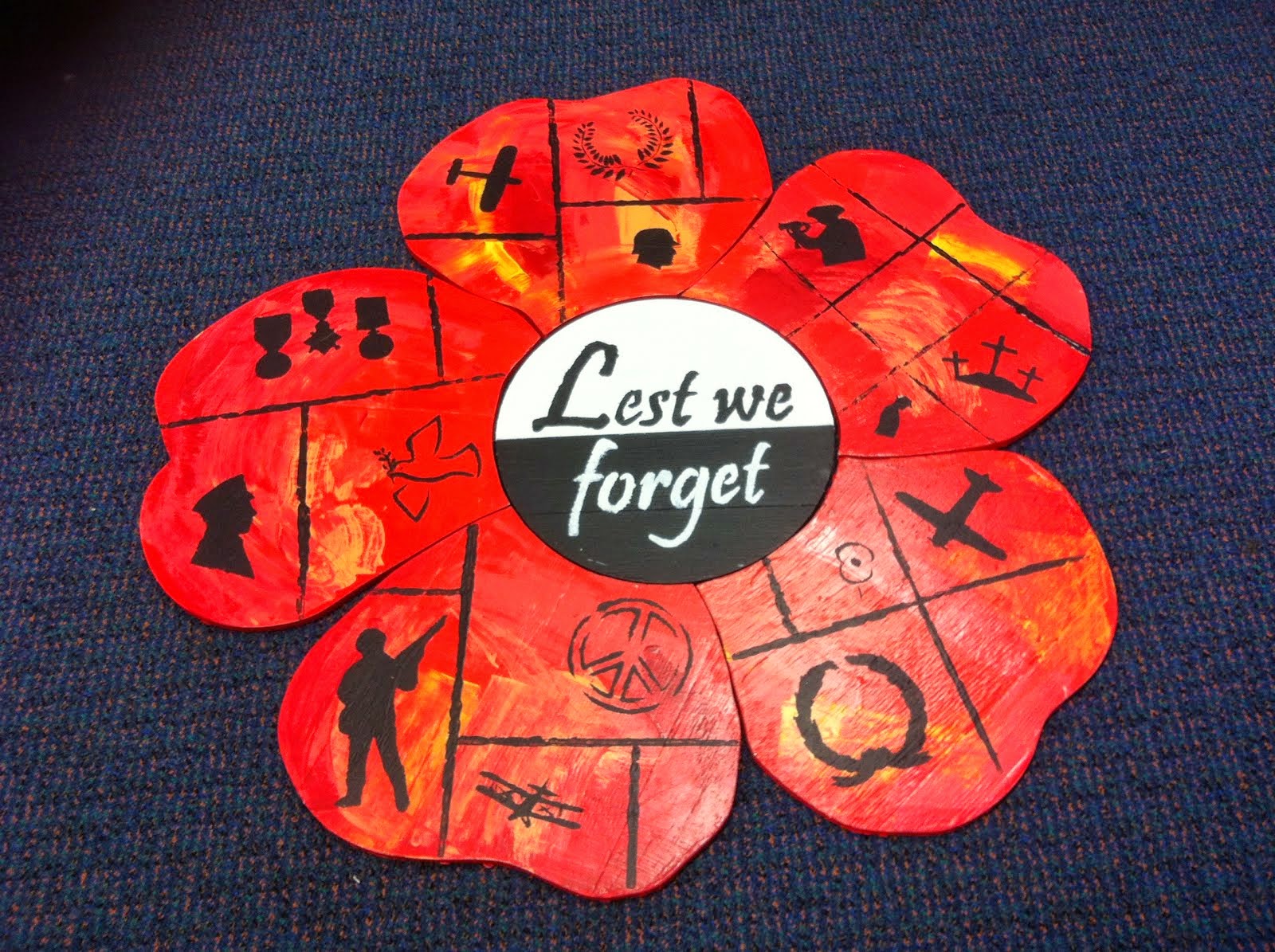